The Vampire has with an eternal thirst for blood and is one of Hell's 3 generals. He evolves into the Pure Vampire.

Description: The Vampire is the Evil side's agility hero, and he packs quite a punch. He comes armed with a hefty combination of offensive passives, Life steal and regen abilities, and plenty of agility based damage abilities.

*Note that cooldowns get longer as you level skills. This applies to all heroes*

Swarm the target with deadly vampiric bats, dealing devastation upon their flesh and stunning them for a moment.

BONUSES: The following items each add 1x agility damage to Wings of Terror.

Use Vampiric speed to quickly feed off nearby units. Damaging them and healing yourself.

Review: Attacks multiple enemies, has a heal, and has a low mana cost. This skill is great. I'd max this before wings of terror. Be sure to increase your hunting profession for stronger heals and more targets hit.

Increase the chance for the Vampire to evade an opponent. Critical strike will 5% chance to deal more Damage.

Review: Similar to the Dark Lord's Combat training, this is amazing for both offense and defense. Currently it seems to be giving more crit chance and multiplier than is stated on the tooltip (vR2.19)

Become Invisible for a short period of time, and strike from the shadows with deadly force

Fresh blood and darkness feed only this vampire to his true power. The more he feeds, the more abilities and power he will have.

With each attack the vampire drains the victims blood and replenishes his own life.

Review: Possibly the best thing you could ask for in a melee dps. This ability will go a long way towards keeping you alive. 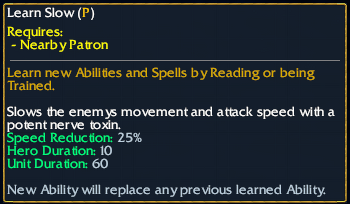 Review: This is good to use on bosses and tougher single targets.

Slice through summons and illusions, causing extra damage to them.

Review: This was nerfed pretty heavily, with how seldom you see enemy illusions and summons (as opposed to bosses just spawning unsummoned units), I don't know how useful it will be. Still useful against Nagator's clones but much less so.

The Magical powder puts the target to sleep for a short duration.

Review: Doesn't work on many bosses, so remains limited in use. However if you find one it does work on, you can perma sleep them while the party recovers.

Unleash the horde of bats upon your enemies as they drain and destroy all in their path.

Review: This skill is just great. Pump up your agility to get more damage out of it.

BONUSES: Each of these items will add an additional 1x agility damage to eclipse.

The fountain of Blood heals nearby friendly units while damaging enemies. The fountain grows stronger alongside the Hero.

Review: This skill is bloody fantastic (pun intended). It shoots out missiles at every enemy in sight and provides you with a whopping 2500 health regen.

Review: Helps when facing large packs of mobs, and I think you might get lifesteal from enemies hit by cleave.

Makes all units within the area fear for their lives decreases their attributes.

Review: a nice little debuff to help you out against tougher enemies.

Attacks all enemies within range so quickly it appears as if there are multiple heroes. Illusions and summons recieves double damage.

Review: Decent agility damage and aoe size. It also looks pretty cool. Use against packs of mobs, and increase your hunting to hit more enemies.

While active all incoming attacka will be countered and all spells cast by the Hero will increase their life.

Review: Great buff for defense, has a long downtime though.

The blood of ancient vampires flows through this hero causing them to have incredible life regeneration and speed.

Unleash the thousands of bats that swirl around the vampire causing massive damage to all those within.

Review: The vampire's ultimate ability. Deals a total of 14x Agility. Use as often as you can.

The following Items all give ability bonuses for Vampire. (vR1.24)

The Vampire's Evolution Location is inside the Temple of Evil. Bring the Ultimate Orb of Evil at level 400 to transform into the Pure Vampire.

Community content is available under CC-BY-SA unless otherwise noted.
Advertisement