A former general for the armies of Hell, the Necromancer aids the angel of light in the hopes that he will become the ruler of the undead after diablo is slain. He evolves into the Undead Daemonic.

Description: The necromancer is a master of raising the dead and casting debilitating curses. His skills revolve around corpses and summons, and summons from corpses. His initial skeletons don't do too much damage, so use them as tanks and cast finger of death for your early fights. By the time you reach 400, you'll be popping out so many summons and raising so many corpses, that the enemy won't be able to make it to you.

Fingers unleash an evil beam capable of bringing death and pain to those being pointed at.

BONUSES: The following items each add 1x intelligence damage to fingers of death. 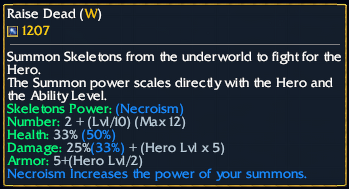 Summons Skeletons from the underworld to fight for the Hero. The Summon power scales directly with the Hero and Ability Level. (Boost from Necroism)

Review: The necromancer has some of the lowest HP in the game. So it would be nice to have these guys to take the hits for you. Unfortunately, the health on them isn't the best. You could invest in lifeforce to make them (and yourself) a bit more durable. 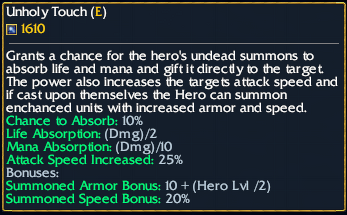 Grants a chance for the target to absorb life and mana. The Power also increases the target's attack speed and if cast upon the Hero, it will enhance all summons with increased armor and speed.

Review: In general you'll just want to keep this cast on yourself before summoning in order to boost the armor and speed of all your summons. You could also cast on a particularly strong summon to give them a little bit more oomph.

An Aura in which undead souls decay nearby enemies armor by causing the armor to age and rust.

Review: Great support skill, this allows you and all your allies to deal more damage to nearby enemies.

The Necromancer is one with death and the darkness. Although a sense of humanity still exists within himself. As he consumes the living he will gain incredible powers of the undead.

Summon a Giant Skeleton from the bones beneath the Earth. (Necroism Bonus)

Review: This guy isn't bad. Better health and damage and armor than your other summons, but you only summon one per cast. Also moves pretty slow.

Creates corpses in the targeted area

Review: This ability is used to create stat based corpses for animate dead. Quite useful.

Review: This is great for damage mitigation. You can simply keep this on autocast and have all your enemies missing. If you're short on mana, just cast it on the heavy hitters to try and keep you and your minions alive.

Review: Update to the ability reduced the movespeed bonus, but the holy dmg reduction seems like it would be very useful in heaven.

Unleash souls from the underworld to splash and destroy the living in massive waves of death.

Bonuses: The following items each add 1x Intelligence to Chaos of Souls

A magical shield surrounds the hero, using up mana instead of health when taking damage.

When the Hero's summoned units die they will grant a small percent of life to the Hero.

Review the life recovery is interesting, but not that useful unless you're evolved since you'll usually be using mana shield. The real benefit to this skill is the buff to your summons.

Unholy spirits emerge from the ground causing anything nearby to wither and die. Pools of blood will be spattered all around with the blood of the innocent causing horrific waves of damage.

Conjure an area of death and despair where all enemies decay while inside undead corpses are brought back to life.

Review: Now that's what I call an ultimate. Deals a total of 15x Intel damage while creating a constant stream of corpses and raising them. Cast Corpses first to get even more summons.

The Necromancer's Evolution Location is in the Ancient Daemonic Temple region. Just walk into the city with Ultimate Orb of Evil on level 400 and he transforms into the Undead Daemonic.

Community content is available under CC-BY-SA unless otherwise noted.
Advertisement